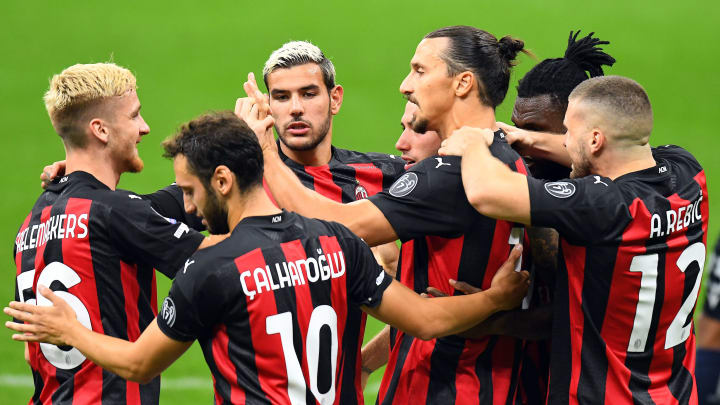 This post is using data to create an ‘opposition’ report on AC Milan.  The aim of this is to use data to deliver clear insights on how Milan play, in order to help teams prepare for games against Milan. In a real-life scenario, this should definitely be accompanied by video analysis to verify that the claims from the data make sense and identify things that can’t be seen from the data. Most of the data in this piece can be found on https://fbref.com/en/ (correct before the start of matchday 21).

Milan are top of the league, and have lost 2 of their 5 games. They have both a strong attack and defence, but neither of these is the best in the league (based on goals scored and conceded).

When we look at their expected goal statistics, we see that they are still doing well but perhaps they are a bit lucky to be at the top of the league.

This is how they tend to line-up, plus their squad depth in each position. Note that Tomori, Meïté and Mandžukić are new signings

Who are their main Goal Threats?

Who creates their chances?

Çalhanoğlu is their main creator, although there are also other players capable of creating chances (Rebic, Leao, Hernandez).

We’ve seen that Milan are dependent on Ibrahimović and Çalhanoğlu to take and create shots, and so they look to give them the ball as much as possible. These two players are the most common targets of passes from teammates:

How do they pass the ball?

Milan are about league average for possession per game (8th most in the league), and have a varied passing style. They are comfortable playing shorter passes or going more direct (red dot is Milan, leftmost dot is the lowest ranked team for that metric and rightmost dot the highest ranked team).

From goal kicks, Milan tend to go long, and most of these passes are likely towards Ibrahimović:

Milan are below average at completing long passes. This suggests that if they can be forced into playing the ball long (e.g., by pressing them), there is less chance of them retaining the ball.

One of the reasons behind this is that Donnarrumma has the 3rd worst completion amongst all goalkeepers for passes longer than 40 yards (37.3%). If Milan’s defenders can be marked when he has the ball and Donnarumma has to pass it long, it may be easier to win the ball back.

More analysis of these uncompleted long passes would be useful, as it would be good to know if these passes are incomplete because they were being pressed or if they were attempting ambitious passes which didn’t pay off.

How do they create chances?

Milan have generated a lot of shots from set pieces this year, have had a lot of penalties and are capable of letting teams have the ball and counter attacking. This is how they fare in shots/goals from various scenarios:

Which players move the ball into dangerous areas?

They’re very dependent on their full-backs, Hernandez and Calabria, to move the ball up the pitch:

When we compare the passing stats of Milan’s full-backs to other defenders in the league (who have played at least 8 90s), we also see that they pass the ball into dangerous areas more often than other defenders (particularly Calabria):

Whilst Theo hernandez doesn’t move the ball forward as much as Calabria with his passing, he’s a good dribbler. Here’s how his dribbling stats compare to other defenders (who have played at least 8 90s) in Serie A:

How do they defend?

Milan are an above average pressing side, allowing the 5th fewest passes per defensive action (ppda):

Looking at the proportion of overall pressures in each third of the pitch, the data suggests that Milan don’t press aggressively in the final third, instead waiting for their opponent to make their way up the pitch more before pressing intensely (3rd highest % of pressures in the middle of the pitch).

What I’d analyse if I had the data

I hope this analysis strikes a balance between providing the relevant people (coaches and managers in this case) with insights which give understanding of how Milan play, even if no obvious ‘actions’ may result from these insights, and insights which can more clearly result in action (e.g., Donnarumma is bad at long passing so make him pass it long). Even though the first type of insights I mentioned may not have a clear ‘so what’, I think that they give the decision-makers (football managers in this case) enough knowledge of the subject area (AC Milan), so that they are prepared to make important decisions about this subject area when the opportunity arises (e.g., ‘if Ibrahimović is their main goal threat and he’s gone of injured, can we take a more attacking approach?’). As I also mentioned previously, this data-driven analysis should also be accompanied by a video analysis. Any feedback on this analysis is welcome.