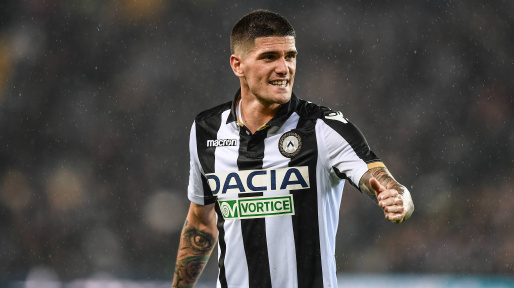 When people hear about Udinese, they tend to think about veteran Italian striker Antonio Di Natale, developing talented players like Alexis Sanchez and their links to Watford. They regularly finished in the champions league qualifying spots/Europa league spots for a few years and were an Antonio Di Natale penalty miss away from progressing into the group stages. However, in recent years they have languished in mid table and flirted with relegation.

Udinese finished in the bottom half of the table last season, yet their key player, Rodrigo De Paul, was in the top 5 players for dribbles and through balls per game. It seems that he carried his team, as he was involved in 17 out of 37 goals (9 goals, 8 assists). He played in centre midfield the most, but also played on the left wing and behind the striker. 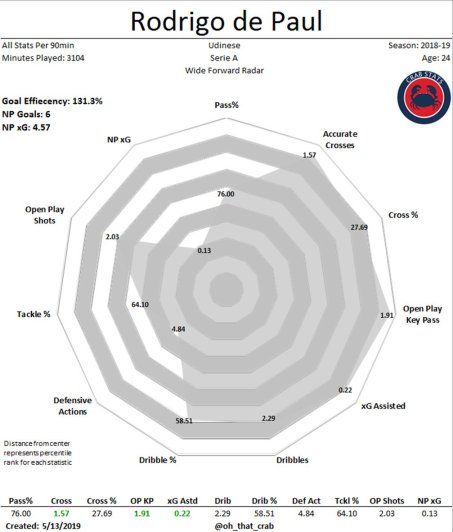 We can see from this radar (from @CrabStats) that he is a good dribbler and is good at creating chances, with 0.22 expected assists per 90. A lot of these chances come from crosses and set pieces, so it would be interesting to know his open play expected assists. He doesn’t offer much defensively, but this is also influenced by Udinese’s style. He also scores highly in Statsbombs’ deep progressions metric (although this is from January). 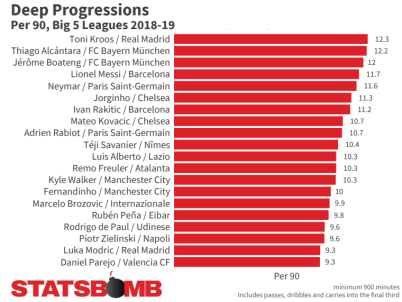 He completes 4.9 long balls per game and 2.25 dribbles per game, so most of his deep progressions probably come from long passes, but it seems he is also comfortable progressing the ball via dribbling. This article also suggests he is comfortable progressing the ball by dribbling: https://saturdaysoncouch.wordpress.com/2019/02/07/fabian-ruiz-rodrigo-de-paul-and-adding-end-product/

You can tell from watching footage of De Paul that he is a forward-thinking player. He’ll either try to move the ball forward with a long pass or dribble his way out of trouble, rarely resorting to playing the ball sideways or backwards. The amount of long balls he plays may also be influenced by Udinese’s direct style, as they have the 8th most long passes per game and 3rd least short passes per game. Sometimes Udinese will only have one forward in the opposition half, and De Paul can help them move up the pitch by picking up the run of the forward with a long ball over the opposition midfield and defence.

His dribbling ability means he can evade the opposition press and draw fouls, or he can draw players towards him and then pass to a teammate in space.

In this clip, he beats his man and plays a pass in behind for Kevin Lasagna.

It’s a good example of him using his dribbling ability to beat a man, and then play a through ball for a striker to run on to. De Paul has the most through balls per game in Serie A, and it’s good to see he has the skill to play those passes alongside his longer passes.

Here are some more highlights of his: https://www.youtube.com/watch?v=i9XKOCIcklY&feature=youtu.be

One of the downsides to his forward thinking is sometimes he tries to do too much and loses the ball unnecessarily.

He is good at progressing the ball and creating chances, but he only records 0.13 non-penalty expected goals per 90. This may not be that big a problem if he plays in centre midfield, instead of further forward. His defensive numbers could also be improved. However, Udinese defend in a low block without putting much pressure on their opponents and are 13th in the league for possession adjusted tackles1. De Paul’s stats may also be slightly skewed from the variety of positions he has played: he completed 3.3 tackles and interceptions per game when playing in centre midfield, compared to an overall average of 2.4 .

Below are his defensive actions per 90, in each of the different positions he’s played this season. 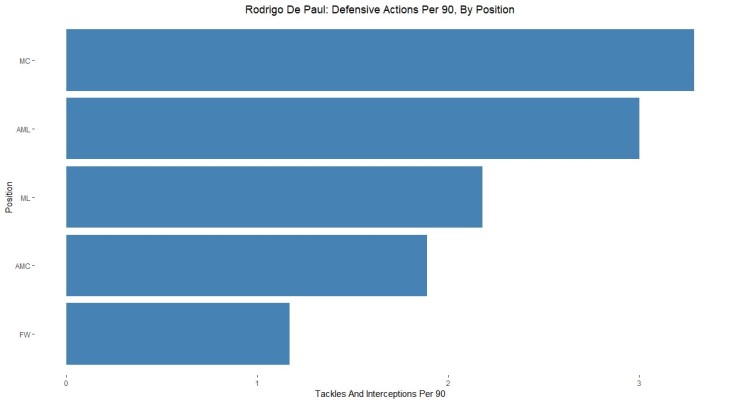 Now, I’ll scan over some clubs who would benefit from buying him. We know that De Paul is good at progressing the ball from deep with his long passing and dribbling, and he can make the most of these skills by playing in central midfield. I’ll use this to identify potential clubs. I don’t want to go into too much detail for each potential team, so I won’t list out De Paul’s or anyone else’s stats each time. I have had look at their stats, but feel free to call me out if you disagree with me.

Watford, Wolves and Crystal Palace all have a fairly direct style, and they had the 8th, 9th and 10th highest proportion of long passes last season. Watford play a 4-2-2-2 formation, so De Paul could play as a conventional central midfielder, or as one of the ‘middle 2’ and be a cross between an attacking midfielder/winger whilst also being able to drop deeper. Wolves play 3-5-2, as Udinese often do, so De Paul could easily play in one of those midfield slots. De Paul also has more expected assists and dribbles per 90 than any of Wolves’ central midfielders this season. Crystal palace play 4-4-2 with narrow wingers who tuck into central positions. De Paul would be best suited to playing on the left of this system.

In terms of bigger clubs, Napoli, Tottenham and Inter are all reported to be interested in De Paul. I’m not sure if he would be well suited spurs, as he would probably have to play further forward instead of centre midfield, and his more direct style may not suit them. Napoli would be the best fit out of all these 3, as he wouldn’t need to adapt to a new league and he could play on the left or in the middle of their 4-4-2. I think he could also do well at Atletico Madrid. Atletico play, you guessed it, 4-4-2 with narrow wingers. His attacking stats are better than their players who often play on the left, with similar defensive stats to some of those players. However, they have just signed Joao Felix.

To conclude, he can progress the ball with a range of passes and his dribbling, but he doesn’t offer much in terms of goals or defensive output. He is probably more suited to a direct style. He is 25, so he is approaching his peak years but unlikely to improve much. In 2017/18, he recorded 0.31 expected assists per 90, showing his last season wasn’t a fluke. He seems to be one of the lesser talked about players in Serie A, and he could be a good signing for various clubs.

1 To get an estimate for possession adjusted tackles, I divided the total number of tackles by the percentage of time spent without the ball i.e total tackles/(100-average possession).